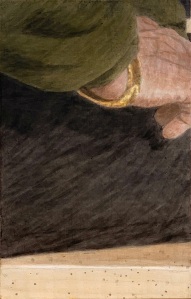 Finally, the last in the egg tempera series. A fore-ground composition full of meaningful, three dimensional human form containing a full range of values: strong contrasts of light and dark. Rendering the flesh tones of the hand and the warm glinting light of the gold bracelet were wonderful challenges. A Renaissance painter would have applied real gold leaf(!) – to the bracelet, that is..

After completing this panel last November I returned to this panel after it cured. I wanted to intensify the saturation of the main shapes of the pants leg and the green sweater with more coats of glaze. I warmed up the hand too. But it’s also important to keep in mind that egg tempera, in contrast to the other media  of this project (that is, oil, encaustic and acrylic) requires a final coat of protective varnish. This varnish will darken all values by about 10%, so I don’t mind leaving these panels a little bit lighter than their companions. Compositionally and chromatically I’m not trying for seamless alignments but at the same time the values should more or less align.

A technical write up here of the lessons learned about egg tempera in this series of panels.

A panel of abstract geometric shapes – diagonal trapezoids except for one lonely cigarette butt lower left. Deceptively easy. Create a few washes and that’s it. But no, there were cool tiles, there were warm tiles, there were neutral tiles. How to create an interesting unity of these subtle contrasts of hue? Then also, how to emphasize the extremely reduced value range – inherent to the original subject – so that this panel, too, is interesting by itself? This is the result. I’ll take it.

Note to self: this was an egg tempera over linen panel. I am slowly finding by experience that the linen is not a good addition on a substrate for egg tempera. It affects the absorbency in a negative way and influences the brushwork in a negative way, too. For oils that is the opposite. For the next time, perhaps a very fine linen weave might be OK, but not a coarse one.

Write up of the overall project here.

A technical write up of the lessons learned about egg tempera in this series of panels.

This is one of the more interesting spontaneous compositions of the overall project. When I first saw it, I wasn’t sure what the long haired girl was doing. Then it hit me, of course, she’s taking a selfie! How 21st century.

The dice-roll treatment for this panel stipulated collage and egg tempera. These are two elements that are almost antithetical to one another. Collage is coarse and heavily textured. Egg tempera is quite refined, subtle and also accentuates any irregularities in the substrate. Thus I anticipated that this one would be challenging. But in fact, as I began laying in colors and calibrating value relationships, the coarseness of the collage didn’t create too many problems, au contraire, it actually enhanced the design (for the most part), which of course is what I had wanted (but couldn’t expect).

Another aspect of the composition is the way it reads as landscape. There are clear foreground, middle ground and background elements. That meant that I needed to modulate my values in such a way to enhance the “landscape” experience. So, given all the givens – of a very contemporary subject mattered panel –  I’m pleased with the way it turned out.

A technical write up of the lessons learned about egg tempera in this series of panels. 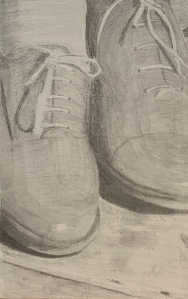 A piece of me #61, underdrawing in india ink

Saturated shoes! I had almost given up on this panel because I was having a difficult time getting a warm saturated tonality. So I had put it aside for awhile to let the previous work cure, hoping the surface would be more receptive after a few days. Today I laid on a couple of washes in venetian red, which is a very warm and saturated pigment, and the shoes began to dance! Literally. Well OK, the inspiration could have been Tina Turner on my iTunes but still, I swear I saw them dance.

The black and white underdrawing on the right, the fully colored developed painting on the left. A full overview description of the whole project is here. A technical write up of the lessons learned about egg tempera in this series of panels here. 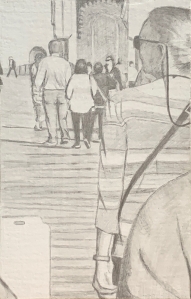 A Piece of Me #11, underdrawing in india ink 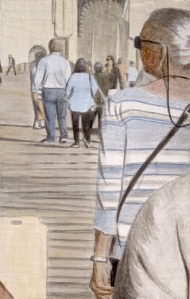 This was one of the more, if not most, complex compositions so far. It was both a surprise and a challenge to do since it contained so many figures – and parts of figures. But because of my approach on this project I do not (for the most part) design the composition, rather, I design the approach (and even aspects of that are still luck of the draw). As it turns out, egg tempera on a flat substrate is perfect for such detail.

Interestingly enough though, the composition also contains the components of a traditional landscape. In this case, the edge of my shoulder appears in the foreground far right, along with the tip of a man’s hand in the far left. Then there’s the lady in the blue striped shirt, perhaps best considered still as foreground, though I was careful not to render her as fully saturated chromatically nor with a full value range. Then there’s the couple in the middle-ground, left. Finally, the array of receding figures. By my count about thirteen in all (!).

So I began with a fully developed black and white underdrawing in india ink, see right. This allowed me to proceed with the egg tempera level slowly and gently by laying in light washes to test for color relation and value development. I realized as I worked that it’s very similar to the process of colorizing old black and white photographs. Luckily, most of the clothing on the figures in the background was (cool) blue, which works well for reading distance, so I kept with that. But I also decided to keep a few of the warm background colors in some of the other figures too, although in extremely light washes. These washes helped to provide a chromatic unity to the warm flesh tones of the foreground.

Like the previous panel this, too, was delectable to colorize. I’m happy and hoping to wind up the egg tempera series soon. A technical write up of the lessons learned about egg tempera in this series of panels here.

A Piece of Me #1, underdrawing in india ink.

A piece of a man’s head with a hat. An evocative untold story? Or no story at all: just this. The weave of the hat was an absolute delight to render, both in the india ink stage on the right as well as the egg tempera on the left. The black and white preliminary drawing then, allowed it to come alive with a light wash of terre verte followed by another light wash of yellow ochre. Fun too, was the supporting neck with its soft fuzzy hairline. The neck, underpainted with terre verte, provided a warm contrast to the cool hat above and the cool shirt/sweater combo below. The perceptive effects of color are always relational. And off in the distance the arabesque details of the Hassan II Mosque in Casablanca beckon.

You can read a description of the full project here. A technical write up of the lessons learned about egg tempera in this series of panels here.

This panel was challenging in three particular ways, first, the flesh tones. Here I decided to follow the Renaissance protocol of underpainting the hand in the upper right corner in terre verte (earth green). It’s a lightly saturated, translucent pigment, so I laid in two coats (over the underdrawing), then proceeded to warm it up through modeling. It took quite a few washes to bring life back from the dead but in the end you get a flesh tone containing many nuances you might otherwise struggle to achieve.

Which led me to the third challenge, how to create a three-dimensional modeling of my leg in a way that works for this panel as well as the final image, i.e., where is the thrust? Because in a general sense, an abstract painting is a form depicting either the essence of form or formlessness itself. So, each panel I create can (at least theoretically) be successful as an abstract painting in its own right. But from my experience of this approach, particularly with the human figure as the overall subject matter, the resulting assemblage may be quite interesting (in a tactile sense) while the figure (as a three dimensional form) reads flat. That’s why I’m trying to pay attention to overall formal aspects like that now.

You can read a description of the full project here. A technical write up of the lessons learned about egg tempera in this series of panels here.

Now the egg tempera pieces are starting to become more complex. This one still has some basic “abstract” shapes but the importance of chiaroscuro in the foreground is becoming more pronounced. This one took me more time, so also more patience while it challenged my skills. For example, achieving the dark black area on the left is already difficult in egg tempera. The medium itself is translucent, the brush strokes dry almost immediately upon contact with the gesso and thick impasto strokes are inadvisable for technical reasons, so blending just isn’t an option. Achieving a field of an extremely dark value or saturated hue then requires the build up of countless layers of light washes. It’s a very meditative technique. You have to love it. Impetuous temperaments, be forewarned: don’t even think about scaling this mountain. You can read a description of the full project here. A technical write up of the lessons learned about egg tempera in this series of panels here.

I completed this panel, #46, in the egg tempera series yesterday. It was an intriguing piece to paint since I was applying lightly tinted washes over an already sculpted pastiglia surface – that had also received its preparatory black and white underdrawing in india ink. So in one sense, I had my work already cut out for me. But in another sense I had colors to coordinate and to balance, as well as textures to enhance. Compositionally, the design of the piece is quite strong, an almost white, emphatic vertical thrust on the left (the leg of my linen pants) which needs to balance with a series of tinted trapezoids (floor tiles) on the right. Luckily, there was some drapery top left whose hues and values echo some of the  shapes on the right. The pastiglia quickly and easily enhanced the chiaroscuro I wanted to add to my pants leg. I’m happy: this stands alone and, I think, will integrate well in the final assemblage. You can read a description of the full project here. A technical write up of the lessons learned about egg tempera in this series of panels here.

Here is #51, next in the egg tempera series. It’s an abstract design (of a section of a plastered wall) that, at first, had seemed deceptively easy. But, in fact, the area of gray and white depicted on the far left required integration, that is, it stood out like a sore thumb until I had supplied a light echo to it on the bottom, right. They say a missing word can cause a poem to bleed. I find the same is true of a painting – no matter what the subject matter. Alternatively – when it’s successful – a work of art is driven by its own inner unity, to which the artist must kneel. An overview of the whole project can be read here.

A technical write up of the lessons learned about egg tempera in this series of panels here.