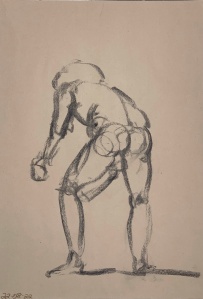 Last night I was happy to see our beautiful young man there again. He has slowly become more relaxed and creative as he learns the posing ropes. Nice. But indeed it was to be his last evening modeling for us, as the summer winds down and soon he will be off to school. But I did discover his name, Kobe, like the Lakers’ famous basketball player. Ha!

Additionally, I had also heard that last night was going to be our last evening at the kasteel (!) but in fact, that’s next week. 😦 Turns out, is was only a summer lease as there is no heating in the place and barely enough electricity for some spot lights, so we will have to go elsewhere. Apparently a new location has already been found – and with a year’s lease. Though sessions will not begin again until the end of October. OK. 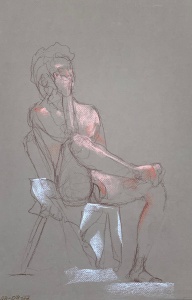 Back to tonight. It was one of those evenings where for some reason it took me awhile to warm up. The first half did not yield any keepers but the second half did. I had purchased some new Canson paper in a grey-brown hue which I was eager to try out. The two fifteen minute studies displayed here are from that batch. Since it is a lighter tonality than the sepia I have been using, I can see that in the future I will want to leave enough time to zap in some shadow accents, too. As it is, I feel these two displayed here are quite successful though a little too light overall in tonality.

As the evening progressed I found myself repeating an artist’s mantra that a friend of mine who studied at the Ecole de Beaux Arts back in the seventies once shared with me:

The first one is appropriate for any two dimensional drawing (like the three minute gestures) but the second two are especially useful for the fuller development of any drawing (for example, the fifteen minute poses included here). Also, you do not need to restrict yourself to figurative work to apply these rules. They apply to abstraction and can help you to evaluate why a good abstract piece actually works – when it does. And, as I think about it, I would add a fourth: the appeal of texture. En français: l’attrait textuel?