Continuing with the series of oil panels in which (I’m hoping that) the underdrawing will be able to remain fully functional through its superimposed layers. Earlier, in the first four oil panels, I had some technical difficulties (now resolved). They were not show stoppers but they did set me back to the drawing board more than a little bit.  If interested you can read about it here. 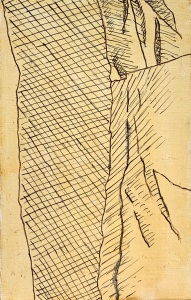 A Piece of Me #45, underdrawing in pen and ink (a mars black oil paint diluted to a dense yet flowable consistency). 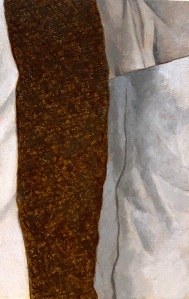 This panel then began with a strong pen and ink underdrawing over an already imprimatura-ed wash of yellow ochre diluted oil paint. I had such success with the yellow ochre as a staring point for my acrylic and encaustic panels, I decided to keep with it for the oil series. See right.

Similar to the last oil panel (#35) this was a relatively simple composition. There were three items to consider, the tip of my linen jacket above right, my white pants legs right and left and the intervening shadow. As with the last one, I glazed in the shadow and then followed it up with passages of opaque paint. The main challenge though was creating a visual distinction between the two linens, the white pants and the oatmeal jacket. Both had shadow and volume play to create interest. I’m really happy with the way it turned out. The forms are pretty delicious. Had to stop and eat lunch though instead of chowing down on it: the curry just had to be more nutritious 😉