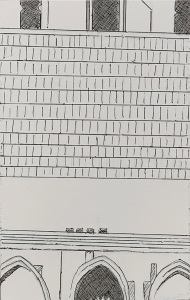 OK, today I completed the second of the encaustic series for the A Piece of Me project. Seen here on the left. Like yesterday’s it was another fairly abstract panel but this time the composition included more detailed shapes, forms and contrasts of light and dark. So after my experience with the first panel, I quickly decided to move away from an underdrawing done in light washes of india ink to a pen and ink drawing which has more contrast. I had already seen yesterday that whatever underdrawing there was (which in that first case was not much) the thick opacity of the encaustic paint quickly obliterated it, rendering it superfluous So, either you forgo the underdrawing altogether or you increase its intensity. I decided to go for the latter. Here to the right then is a photograph of the revised pen and ink underdrawing (completed over the original india ink wash). There are a lot of details which I know will not be seen in the completed painting, but, like the whiskers on a man’s cheek in a painting by Memling or Holbein, these strokes will still have a role to play in the final painting.

So I began my approach as I did yesterday, slapping on coats of white and yellow ochre. I quickly had a mess of nothing. Using paper towels and a hot iron I melted it all off and started over again. (This is common in encaustic.) Still, this melting left an overall tint of yellow to the panel. I mixed up a light tint of white and yellow ochre, which I began applying in small strokes to mimic the architectural forms of bricks, panels and arches. This allowed some of the underdrawing to show through in strategic places. Nice, this was going better now. Then I melted up a tint of burnt umber for the shadowed forms. Using a small brush I lay the shadows in. Again, nice. Taking up the infra red heat lamp I burned it all in. I stopped, satisfied, at least for the moment.

Technical write up of using encaustic for an indirect painting technique here.